“Carlos has done a prodigious job to set the foundation for anyone’s success.”

“It creates awareness of our current alarming social-economic situation,

which will doom younger generations.”

“It is especially an enlightenment to those that feel overwhelmed by everyday financial responsibilities.”

“This book is a key to success to any person not familiar with current mechanics applied by the finance system.” 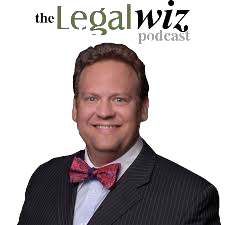 Is the US Education System Failing You?

Isn’t It Time You Discover How the System Works You and Takes Control? 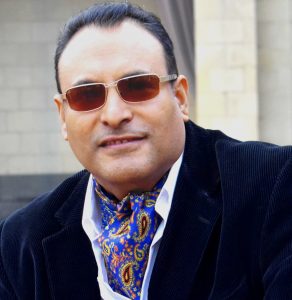 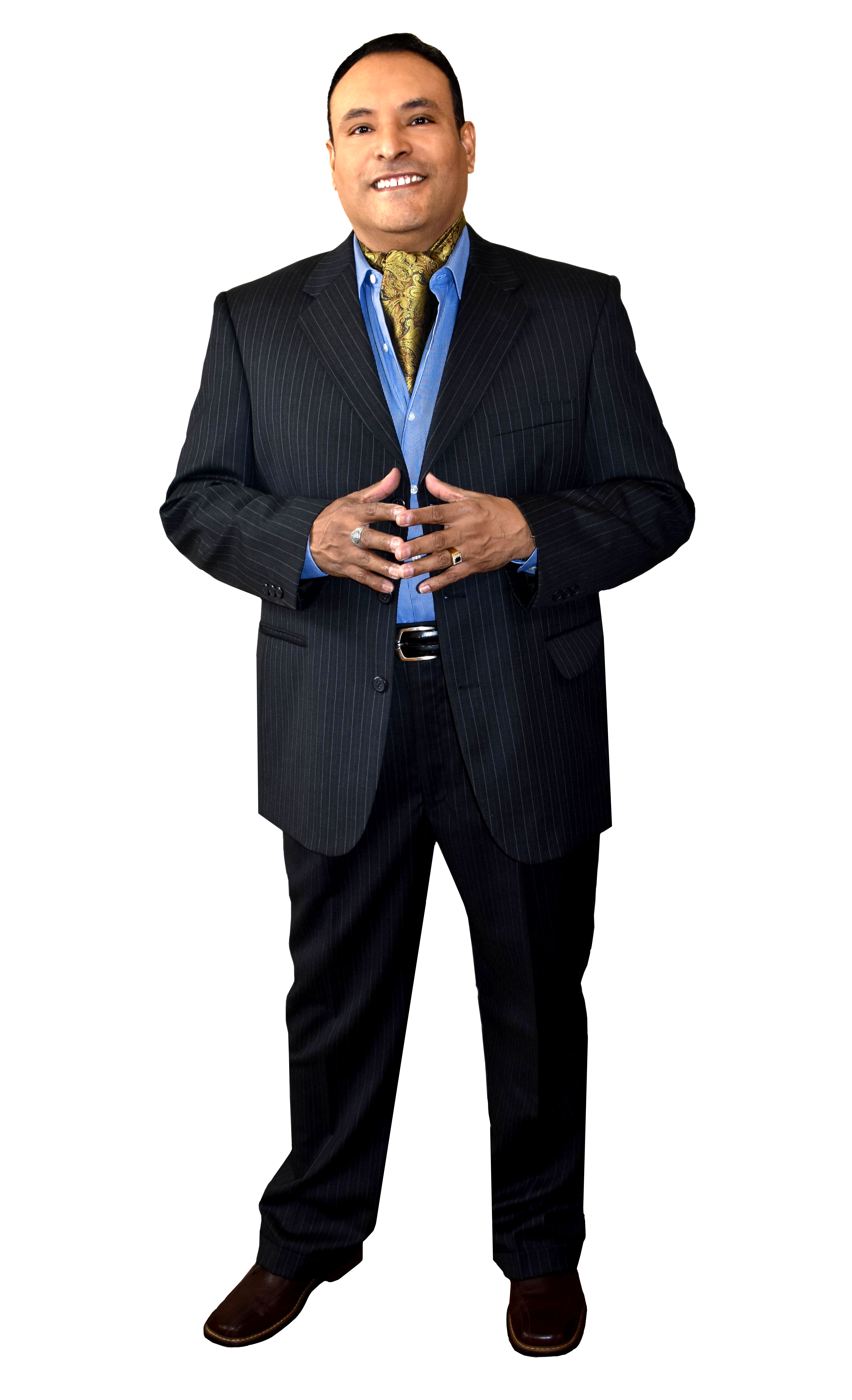 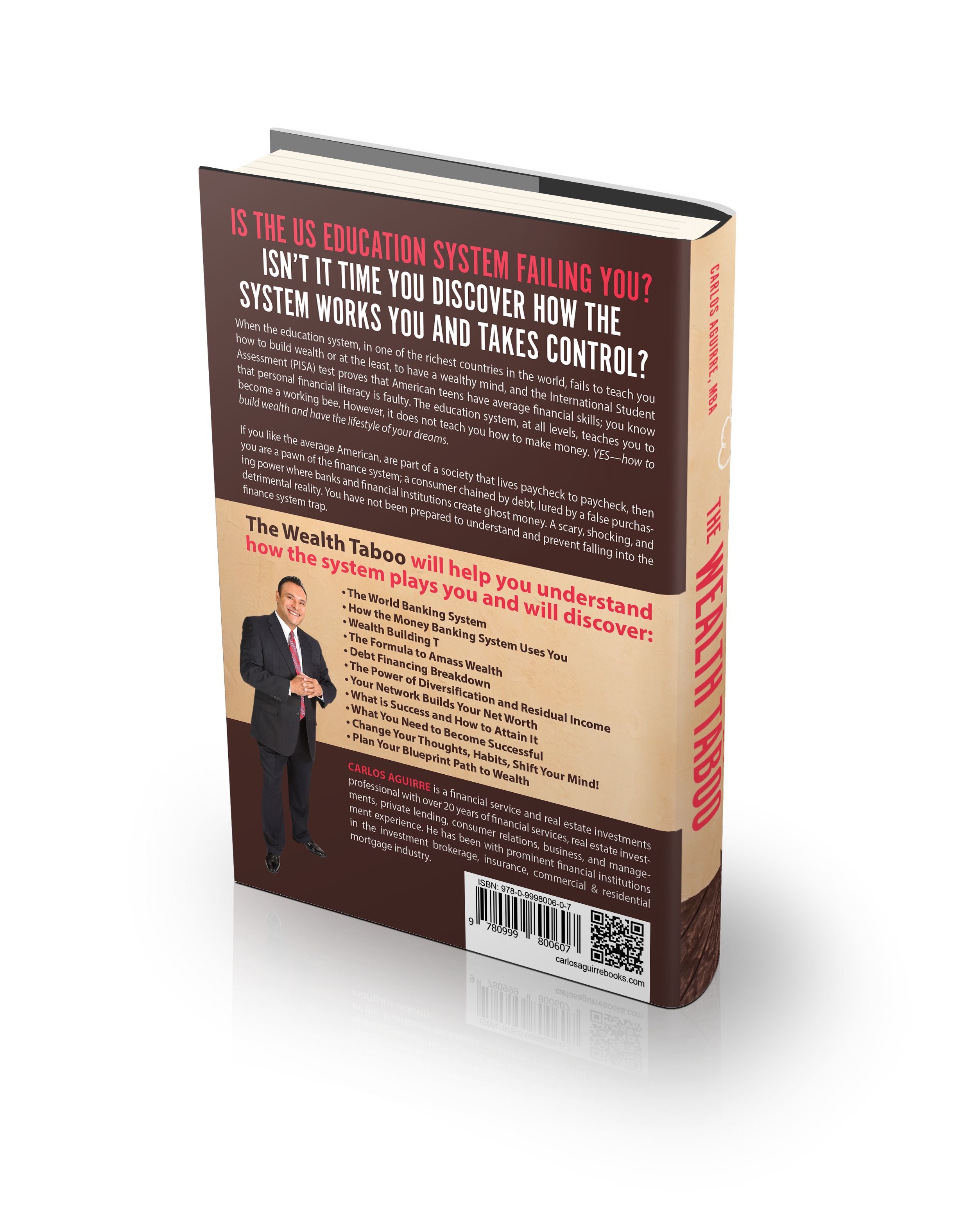 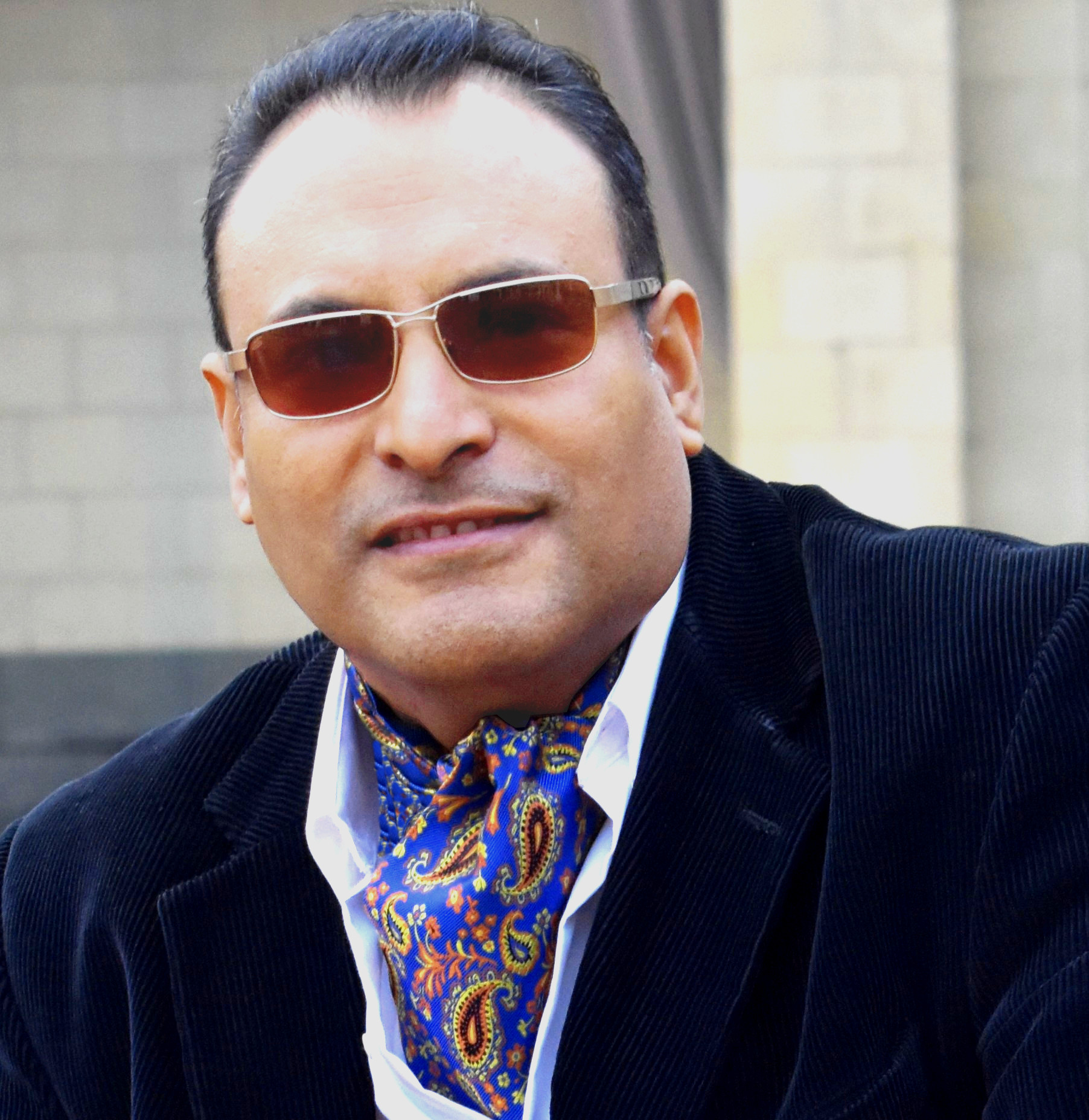 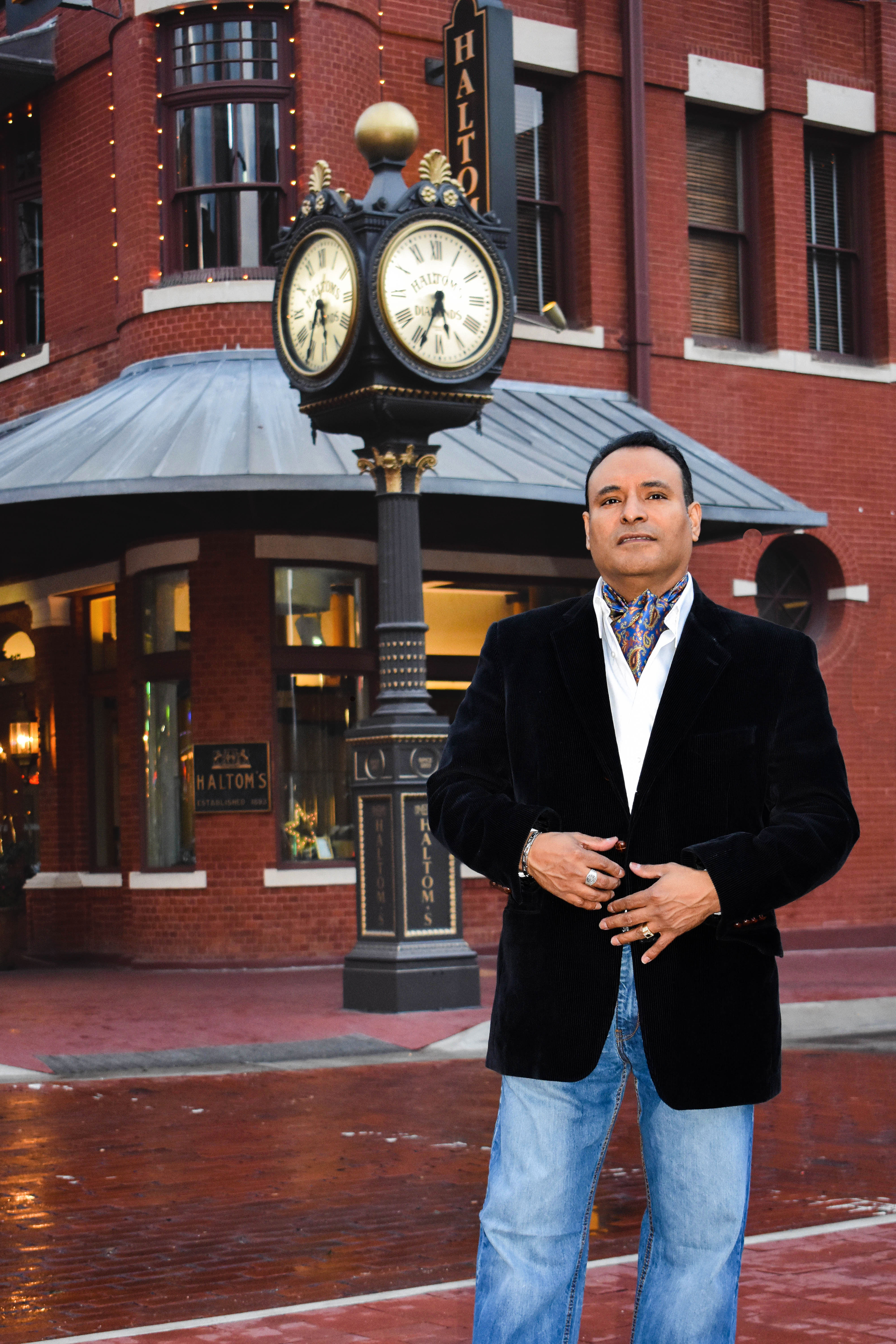 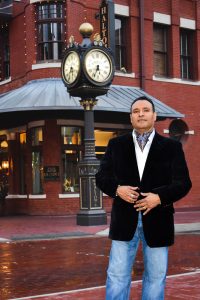 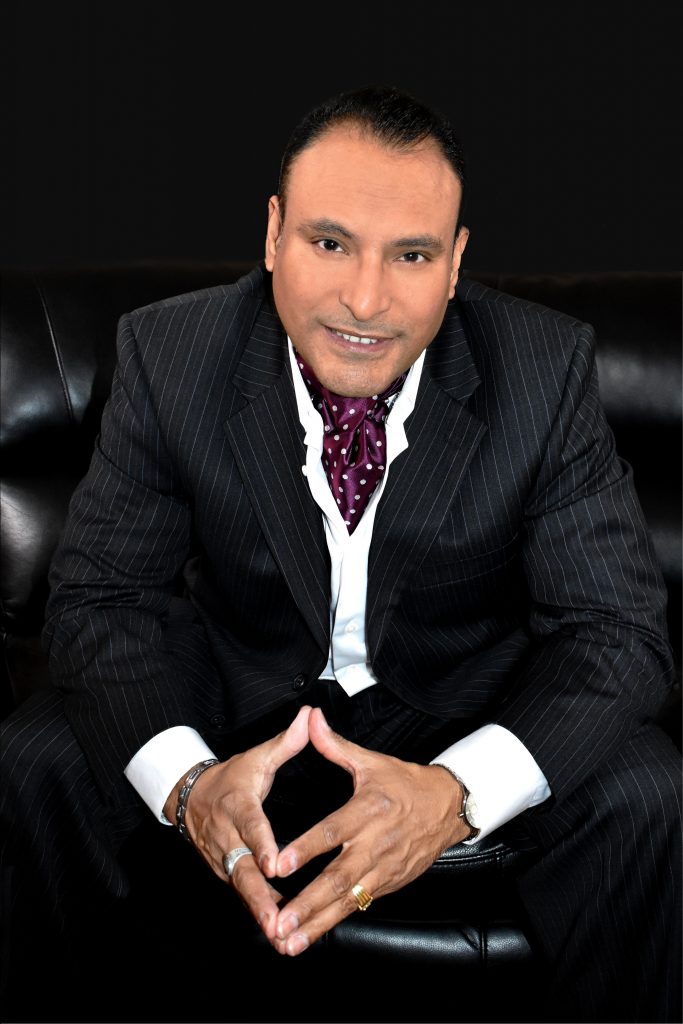 When the education system, in one of the richest countries in the world, fails to teach you how to build wealth or at the least, to have a wealthy mind, and the International Student Assessment (PISA) test proves that American teens have average financial skills; you know that personal financial literacy is faulty.

The education system, at all levels, teaches you to become a working bee. However, it does not teach you how to make money.

YES, how to build wealth and have the lifestyle of your dreams.

If you like the average American, are part of a society that lives paycheck to paycheck, then you are a pawn of the finance system; a consumer chained by debt, lured by a false purchasing power where banks and financial institutions create ghost money.

A scary, shocking, and detrimental reality. You have not been prepared to understand and prevent falling into the finance system trap.

The Wealth Taboo will help you understand how the system plays you and will discover:

GET IT NOW at most major online bookstores including amazon, Barnes & Noble and Kindle 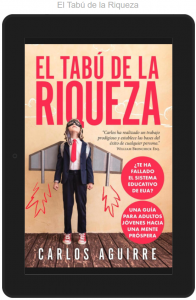 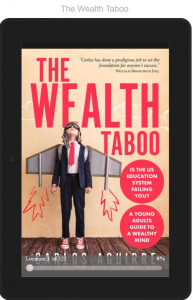 “The Wealth Taboo is simply clever, full of practical wisdom that will allow you to jump-start your understanding to the world banking system, its effects on your personal finances and your path to success.”
William Bronchick, Esq.

When you consider the current deficiency in the education system at all levels from high school to college and it is not preparing our youth to become financially independent, you know that the new generations have a tremendous weakness. Even with higher level education and work experience, many Americans have a drawback with their personal finances. If you do not understand how to work the financial and banking systems to your advantage, you will struggle financially in your golden years.

Our education system fails to teach the youths of our society practical ways to build wealth, and do not explain the processes of the banking system. Nor are they financially educated in ways to prevent generations from falling into its trap.

The Wealth Taboo is simply clever, full of practical wisdom that will allow you to jump-start your understanding to the world banking system, its effects on your personal finances and your path to success. Most financial books focus on financial strategies and procedures only, but Carlos has done a prodigious job combining financial information and a growth mindset path to set the foundation for anyone’s success.

This book is an inspiration to many people, especially the younger generations. It is a revelation for most American families that live paycheck to paycheck and have fallen trapped by a vicious debt cycle enticed by false buying power. It creates awareness of our current alarming social-economic situation, which will doom younger generations if they are held captive into the same statistics prior generations are currently part of.

It is especially an enlightenment to those that feel overwhelmed by everyday financial responsibilities and cannot see the light at the end of the tunnel. Further, it gives a path to those that have some ideas but have not been able to channel them properly to follow their path to success.

The Wealth Taboo does a tremendous job explaining the world banking history and the current mechanics applied in the United States and worldwide in a simple to understand terms. It is a periscope, which allows you to see many ways to overcome your financial situations to your benefit.

This book is a key to success to any person not familiar with current mechanics applied by the finance system. In addition to providing a new optical to approach personal finances, it provides a detailed path and procedures for personal growth allowing you to develop a growth mindset with an abundance mentality and a wealthy mind. 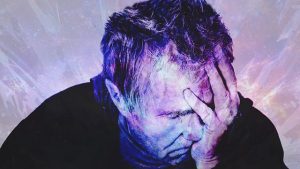 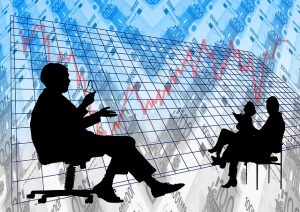 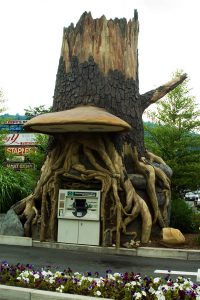